INREAL became the National Winner in the prestigious European Business Awards competition for the third year in a row. This time, it was in the Social Responsibility and Environmental Awareness category where INREAL presented the project of Smiltyne Yacht Club – a complex of navigation, accommodation and recreation in the Curonian Spit.

"Participation in this competition enables to evaluate our business achievements in a wider European-level context. By presenting Smiltyne Yacht Club, we have shown Europe the unique objects that are created in our country. And this achievement is the success of both the INREAL group, as well as the success of the entire Lithuania", – says INREAL Director Gediminas Pruskus.

A total of 110 000 companies from 34 countries participated in the 2017-2018 European Business Awards. 289 companies received the National Winner title among which 9 companies were from Lithuania, 7 - from Latvia and 8 companies were from Estonia. INREAL was the only company among Lithuanian National Winners who had won in the Social Responsibility and Environmental Awareness category. In previous years, INREAL group received the National Winner title for its "Kopų vėtrungės" project in Nida, as well as "Danės užutėkis" and "Dangės krantinės" projects in Klaipėda.

Adrian Tripp, CEO of the European Business Awards, said: "It is a wonderful achievement. Each winning company is transparent and a leader in its sector. To be the National Winner means representing our values – success, ethics and innovation. And this means to be one of the best in Europe. We wish you the best of luck in the final stage".

12 European business winners, one in each category, will be announced in the grand final which will be held in May.

The judges' commission of the European Business Awards is comprised of 234 people – entrepreneurs, professionals in their field, scientists, journalists, etc.

The list of all the National Winners can be found here – www.businessawardseurope.com. 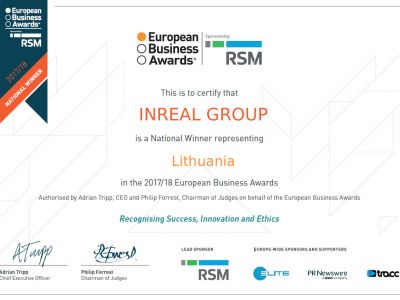