730,000 EUR investment into the development of the complex Smiltyne Yacht Club

November 22, 2016. Smiltyne, Klaipeda. The development works launched in Smiltyne Yacht Club (Smiltynes Str. 25, Klaipeda). The second hotel of Smiltyne Yacht Club will open on 1st May 2017. The new hotel will offer 25 family suits with kitchenettes and spacious terraces. The complex will have a conference hall with the capacity of 100 people, and two halls for 200-500 people intended for concerts and various recreational and artistic events. The investment to the development of the project amounts to EUR 730,000.

According to Agnius Tamošaitis, Head of RE Management Department of Inreal Valdymas - the project developer, the new quality for the complex Smiltyne Yacht Club will be provided by the halls with non-traditional spaces and huge panoramic windows, situated in the reconstructed boathouses. “These halls with the capacity of up to 500 people will provide an opportunity to organise events and festivities without any fear of weather conditions, which are difficult to forecast in Lithuania”, – A. Tamošaitis stated.

“The previous season showed that the most popular accommodation is a family suite. Therefore, the new hotel will offer even 25 family suites with kitchenettes, terraces and conditioning system in the rooms”, – Ana Timonina, Smiltyne Yacht Club Hotel Manager, told.

Two hotels of the complex will be able to accommodate up to 140 adults simultaneously. Transport to the continent will be available not only by a ferry, but also by water taxi. The territory allows organising events for up to 2,000 people. The total investment into the renewal and development of the hotels Smiltyne Yacht Club amounts to 1,330 thousand euro. 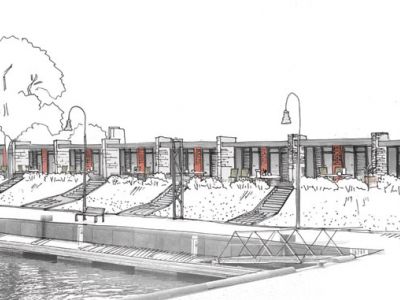